Based on a collection of photographs, voice recordings,diaries and the results of anthropometrical registration that were produced in Namibia in 1931, the exhibition What We See engages with a collection that was envisaged to become an archive of vanishing races.

What We See foregrounds the spoken und sung recordings with Namibians who had to endure the practice of producing casts, measurements, and photographs, many of which were created in the police station in Keetmanshoop in August 1931. The recordings were held in the Phonogramm-Archiv in Berlin and were translated and transcribed on initiative of Anette Hoffmann in 2007/8.

The exhibition creates a resonating space of sounds and images. Not opting for the spectacular, the body casts, which were the main result for Hans Lichtenecker who was the producer and collector of this disturbing archive, are not shown. Instead, What We See sets out to create a space of re-reflection of the colonial reality of classification of humans that is juxtaposed by the speakers’ responses to this project. 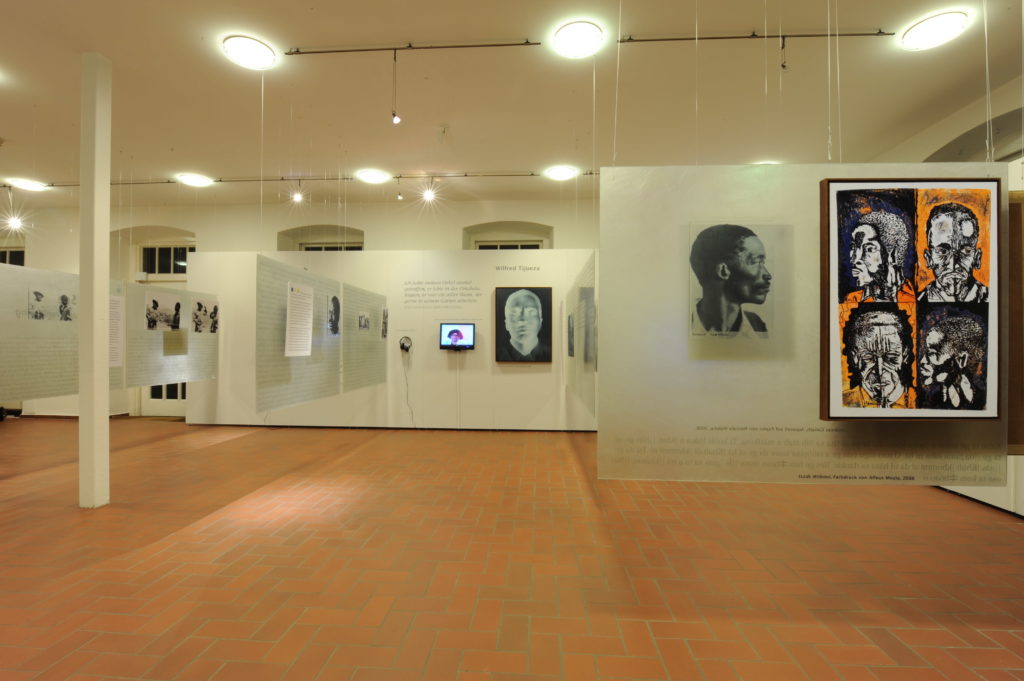 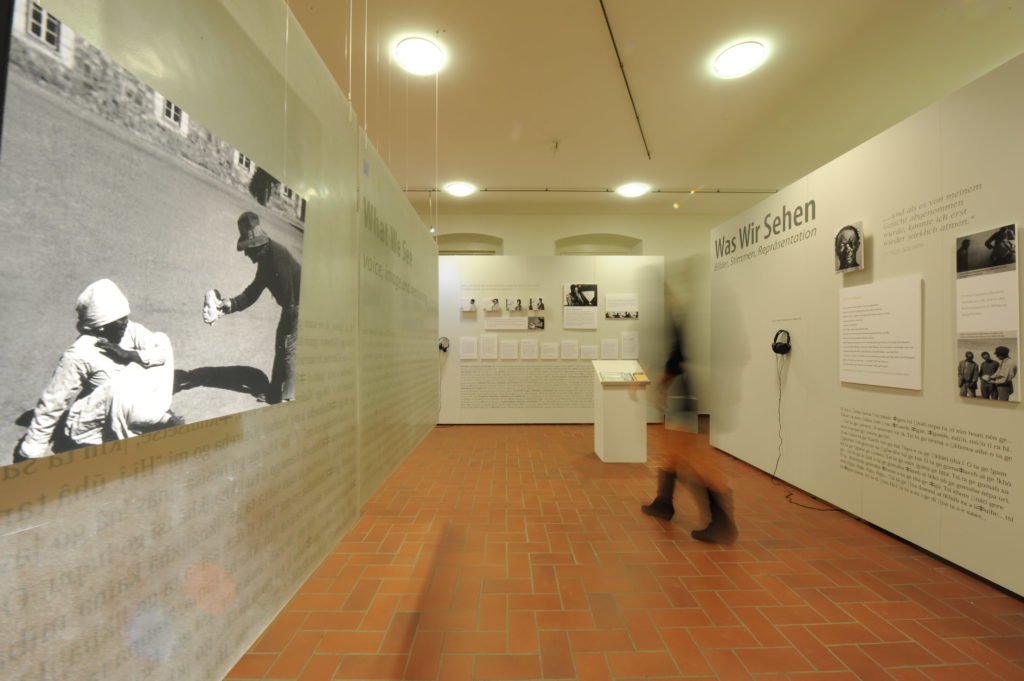 The German Hans Lichtenecker (1891-1988) had lived in the former German Southwest Africa during World War I. He returned to the country in 1931, with the aim to create an archive of vanishing races. To this aim he created life-casts, measurements, photographs and voice recordings with Africans. For the German raciologist Eugen Fischer he also took photographs of people in Rehoboth. In southern Africa, the idea of vanishing races was often projected towards speakers of Khoisan languages, who thus became the target group of anthropological collections of human remains.

These remains and results of measurements, depictions (including casts) and descriptions were sought after as the basis for the classifications of race and evolutionist theories by scholars, museums, and medical institutions. For Lichtenecker the voice recordings, which he handed over to the Phonogramm Archiv in Berlin, were voices of natives and thus a supplement for the archive of races. Therefore, and because he did not understand any of the African languages spoken in the country, apart from Afrikaans, Lichtenecker was not interested in the content of speech and song he recorded.

At the Phonogramm-Archiv in Berlin the collection, which consists mostly of spoken texts, did not attract much scholarly attention, since the institution’s main research interest was the field of comparative musicology. In 2007 the recordings were digitized and taken to Namibia for translation. These translations by Memory Biwa, Levi Namaseb, Rhyn Tjituka and Renathe Tjikundi-Meroro made available a collection of astounding, often disturbing comments of Khoehoegowap and Otjiherero speakers, who responded to the anthropometric project.
The men and women who spoke into the phonograph also commented on the situation of Africans under colonial rule and spoke of the war of 1904-8. The recordings are available for research at the National Archive in Windhoek in digitized form. The photographs and diary are held by the Namibia Scientific Society, the collection of casts and measurements is held by the National Museum in Windhoek. 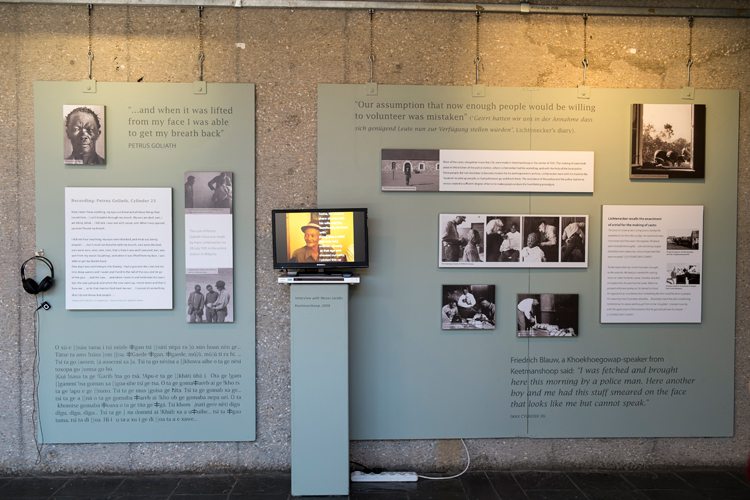 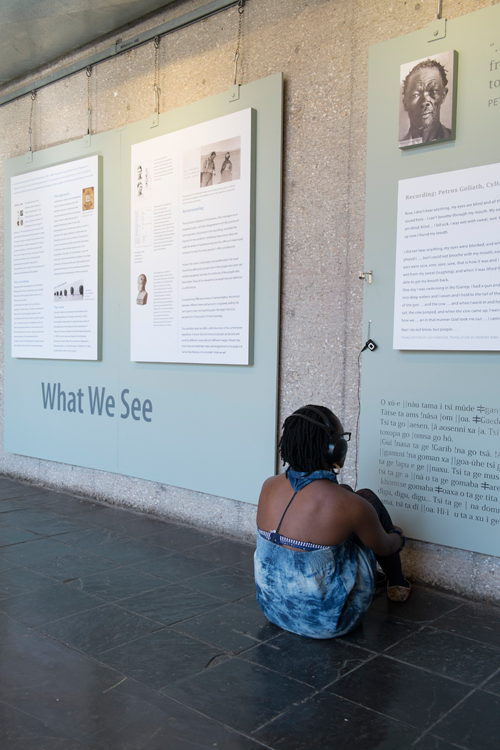 Rejecting their position of objects of research, or racial types, the speakers present themselves as social actors on the recordings; speakers perform omitandu or protest against the anthropometric practice which they were made to endure. On the basis of the recordings and Lichtenecker’s diary and photographs, the exhibition engages critically with the attempt to create an ‘archive of races’. The recordings, which can be heard and read in the exhibition, speak to the racialising practice and colonial power relations more generally; some of the recordings transmit messages to Germany, which were not received at the time. The recorded comments of the speakers juxtapose the visual representations of the anthropometric project, which cannot represent people. Listening to the historical recordings disturbs the anthropological image of humans as elements in a register of races and thus unmoors the certainty of the gaze.

The objectifying representation of Lichtenecker’s collection is also disrupted by recent video interviews and the artistic representations of five of the speakers: Isaak Witboi, Andreas Goliath, Wilfred Tjiueza, Lena and Haneb (of the two latter speakers, the surname is not known). Artistic versions of portraits were created by Alfeus Tjiueza, Mustafa Maluka, Sanell Aggenbach, Lonwabo Kilani and Mduduzi Xakaza. Altogether the photographs, the recordings, videos, artworks and texts speak to each other, and thus create a dialogic space, which reflects on imperial practices of representation, and affords the visitor with the unusual opportunity to hear the historical recordings of comments to these representational templates from a subaltern position. The claim of objectivity or the ‘real’ of a colonial visual archive is disturbed by the voice recordings of the witnesses of its’production.
The exhibition was produced In Cape Town in 2009 and first shown at the IZIKO Slave Lodge in the same year. From there it traveled to the Basler Africa Bibliographien in Basel, Switzerland; to the Ethnologisches Museum in Vienna, Austria (2010); to the Felix Nussbaum Haus in Osnabrück, Germany (2010); and to the Pergamon Palais of the Humbold University in Berlin, Germany. The Franco-Namibia Cultural Centre in Windhoek is the final location for the show. The archival material of the exhibition will be donated to the National Archives in Windhoek and other institutions. Many institutions and people have generously supported this project. We thank the Carl Schlettwein Fondation in Basel, the Centre for Humanities Research at the University of the Western Cape, IZIKO Museums Cape Town, the Heinrich Boell Foundation in Cape Town, the Phonogramm-Archiv in Berlin, the Namibia Scientific Society in Windhoek, the National Museum in Windhoek, the National Archives in Windhoek, the Mopane Foundation in Windhoek, the Archives of the Anticolonial Resistance and the Liberation Struggle Project in Windhoek and Frankfurt, the Zentrum Moderner Orient in Berlin, the Archive and Public Culture Research Initiative, University of Cape Town, and the Spedition Haalboom in Hamburg. 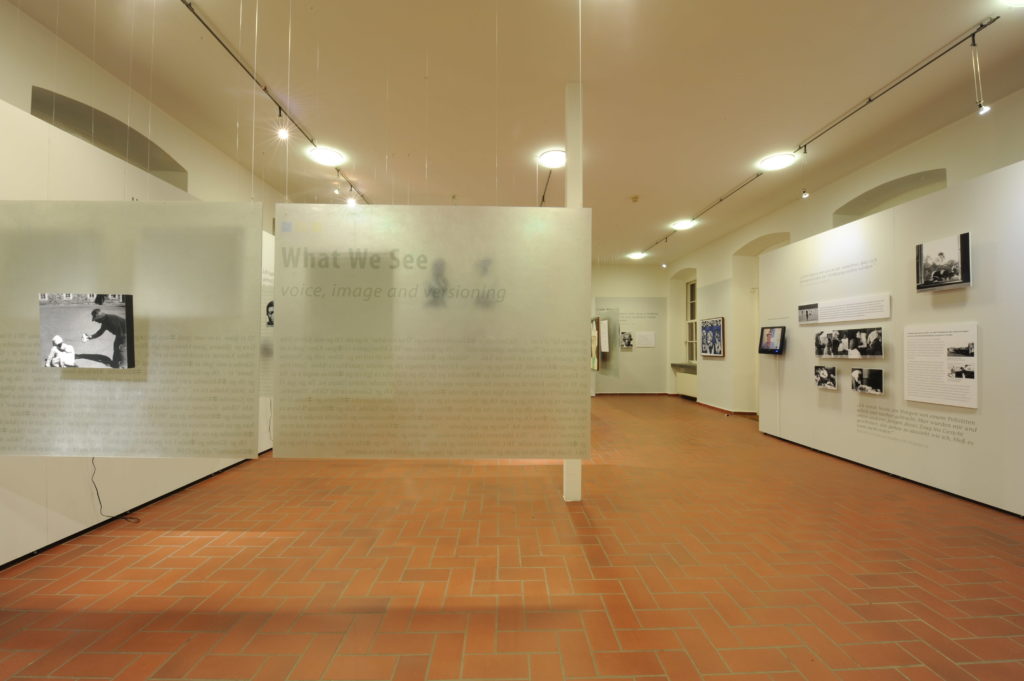 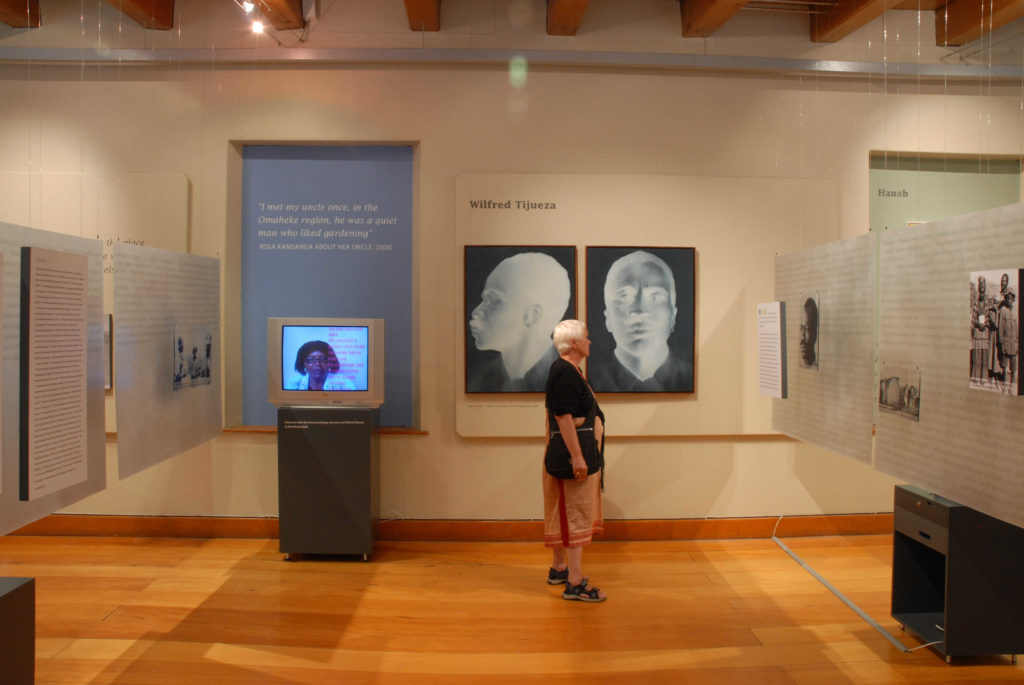